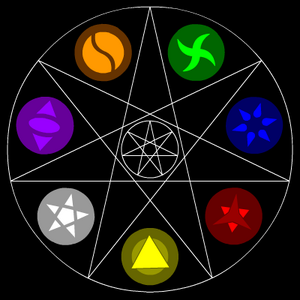 Most actions and effects achieved through the use of magic can be divided and categorized into one Elemental dominion, which indicates the region of influence. The seven Elements are Nature, Water, Fire, Earth, Light, Darkness, and Spirit.

The first four Elements can be grouped into a category of their own: the "Physical Elements", while the last three are collectively known as the "Ethereal Elements".

The Physical Elements, as the name suggests, governs realms of nature and the physical world, and have little to no influence on more mental, psychological, or similar types of enchantment. Nature, Water, Fire, and Earth are the four Physical Elements.

Over the long and convoluted history of magic, users have often attempted to prove that certain Elements are superior or inferior to others; thus, many and varying hierarchies have been established. However, in the early 26th century, superological studies have proven that such hierarchies are highly questionable in regards as to their authenticity or reliability. Subsequently, the argument persists that no definite measure of superiority or inferiority can be established so long as a staggering amount of external factors remain, making it impossible to truly calculate the value or power of any given Element.

The Evergen are seven creatures of great power who each serve as living protectors of every Element. They reside in the Everworld, and for all intents and purposes are physical incarnations and manifestations of their respective Element, and are capable of wielding that Element in its entirety. The maintenance of each Element and the capability of all other Elemental magic users relies upon their survival, as their existence is parallel to the well-being of their Element as a whole.

Within the Seven Shrines are enormous crystals that house an immense amount of magical energy, each of which are also attuned to one of the Seven Elements. These crystals, called shavehdeen, are remnants of the original magical energy that resulted from the Evergen's impact on Gloph after emerging from Chaos.

Community content is available under CC-BY-SA unless otherwise noted.
Advertisement